After Tuesday nights goal jamboree this was a more dour game and Barking eventually ground out a two goal win but Brentwood can consider themselves unlucky after having most of the first half.

However, it was Barking who maintained their top of the table status with two Junior Dadson goals in the last twenty minutes to claim the points and remain top of group two of the Velocity Trophy.

The home side were under early pressure but only a good save from Montel Joseph denied Brentwood’s Jason Williams. Barking threatened through the left hand side running of Junior Dadson and Jordan Peart but none of their crosses found the intended targets. Barking survived a when Ricky Tarbard chasing back challenged and appeared to get a good portion of both man and ball. Brentwood went close again through Marcus Miller whose shot flashed across goal and Barking’s best efforts was an on target shot by Johnny Ashman which was beaten away by former blue Tim Brown and a Sheri Artmeladze shot which Brown saved with his feet. With half time nearing there was a major let for the home side as Andrew Freeman’s curled shot beat Joseph, smacked the bar and flew over.

Sam Owusu was replaced at the interval by Max Bradford who made his first appearance in a blue shirt. Barking began the second half better with Jordan Peart again showing his fast feet and close control to good effect and it resulted in a Artmeladze effort that was just wide. A free kick from Johnny Ashman quite some distance from goal was turned away by Brown as the home side began to find their shooting boots. Montel Joseph made an excellent point blank save from Freeman from close range in what probably was the turning point in the game as shortly after Barking were ahead. There were nineteen minutes left when Artmeladze charged forward to find Michael Dixon who fired in a low powerful shot which Brown could not hold and the onrushing Junior Dadson who made no mistake to put the home side a goal to the good. As to be expected Brentwood tried to come back into the game but our defence held firm and got everything away. For Barking Dixon found the side rather than the back of the net and sub Nana Boakye-Yiadom was denied by Brown’s feet as the home side looked in control. On 81 Barking wrapped the game up: from a Brown goal kick the ball was recycled back to Abs Seymour who freed Dadson down the wing, his cross was cleared to the incoming Seymour whose shot was blocked and when Artmeladze tried to control the ball it fell nicely for Junior Dadson to lash home through three defenders and into the net. In the end we ran comfortable winners but we must acknowledge the contribution of the cross bar and Montel Joseph’s frame in this victory.

We return to league action next on October 5th for our first home game on a Saturday with a 3pm kick off against free scoring league leaders Westfield FC which promises to be a tough encounter. 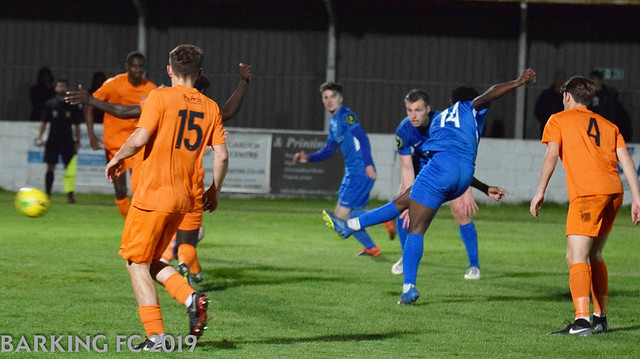