POINTS SHARED AS CHALFONT REFUSE TO PETER OUT

A manic game ended with a share of the spoils for both sides at Mayesbrook Park, although at times it could have gone either way and Barking nearly stole the points near the end of the match. Barking took an early lead as Abs Seymour set Junior Dadson through on goal who unselfishly squared the ball to Michael Dixon to squeeze the ball home from a narrow angle. Barking kept their foot on the pedal and should have doubled their lead save for some brave defending - Dadson's low shot smacked the post with the rebound falling to Dixon who saw his effort cleared off the line before Steven Sardinha's scrambled effort was saved by the feet of stopper Sam Freeman. Chalfont turned the tide from there on however and pushed Barking further and further back and got their reward with half time approaching as Dan Williams long range shot squeezed past Montel Joseph and into the net. Barking nearly had the lead back just before half time as a dangerous free kick found the airborne feet of Dumebi GB-Dumaka but his volley was saved by the face of Freeman.

The second half started with Chalfont again looking more dangerous looking comfortable both in possession and likely to score from set pieces. They took a lead that at that point was probably deserved after 71 minutes on the balance of play as Joseph palmed a long shot away but only to the feet of the waiting Williams who side footed the ball home for his and Chalfont's second. The response was immediate however as Barking pushed forward from kick off, with a Chalfont player prone GB-Dumaka blocked a defensive clearance and as Brennan attempted a second clearance GB-Dumaka stepped in front of the ball causing Ricky Brennan to scythe him down. Michael Dixon stepped up after a delay and sent Freeman the wrong way but his powerful effort was unstoppable for our equaliser and his fifteen goal of the season. 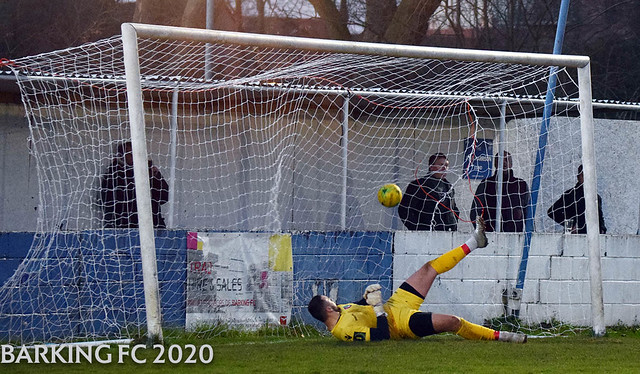 Barking pushed on in the final ten minutes and Freeman did well to tip a Sherri Artmeladze piledriver onto the bar. Barking thought they had it won in injury time as a succession of corners led to a scramble with the ball falling to Dixon, his attempt beat Freeman but Brennan atoned for his earlier sins as he somehow got his leg in front of the ball to block it away and deny the Barking striker a hat trick. There was still time for a Ricky Tarbard effort to just clear the bar but the final whistle blew allowing both sides to catch their breath and reflect on what could have been.

This coming Tuesday evening at Mayesbrook Park we have a rearranged game against the team immediately above us Uxbridge FC with a 7:45pm kick off. 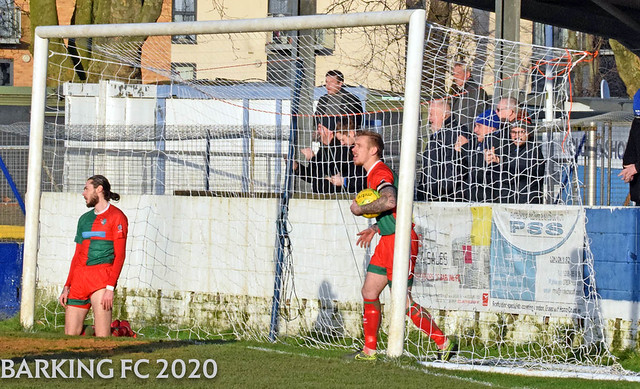