The Blues of Barking beat the Green Lions of Guernsey in our first ever encounter at a soggy Mayesbrook Park. Not only did we progress to the first qualifying round of the FA Trophy we also claimed a welcome bonus in the form of £2,250 in prize money.

It was Guernsey’s return to the FA Trophy and were probably not helped by their extended journey as their early morning plane was diverted to Southampton from Gatwick.

Guernsey started the first half brighter and had the best early play resulting in a loud penalty appeal for handball after 13 minutes but the referee was unmoved much to their dismay. Guernsey looked confident in possession but it was Barking who came back into the game and took the lead after 38 minutes as a drop kick went over the defenders head leaving Michael Dixon in space on the right to find Abs Seymour in the box who caressed the ball home to give Barking the lead which they held going into half time.

The visitors again enjoyed the greater of the ball in the second half and would have been level after 58 minutes thanks to a William Fazakerley tap-in but thankfully from a Barking perspective the flag was up for offside. Guernsey were the better side and got an equaliser after 66 minutes as a Sam Owusu foul presented Ross Allen with a chance to curl a top quality free kick across Montel Joseph and into the corner of the net. Barking did come back into the game and pulled some good saves out of Callum Stanton but he was helpless after 84 minutes as Barking secured their passage into the next round as Ricky Tarbard's long throw was nodded on by a visiting defender for Michael Dixon to swivel and volley home. 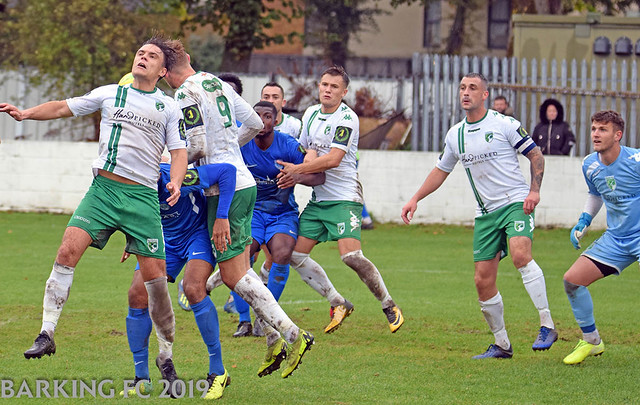 As a result our league game at home at Chertsey on October 26th will now be postponed and we await our next opponents in the first qualifying round of the FA Trophy, the draw for which will be made on Monday. Meanwhile we have no midweek game and return to league action with a visit to Chalfont St Peter for the first time since April 2000