On yet another wet Mayesbrook Park Saturday afternoon Barking came away with a vital three points against a winless Staines Town with a score of 3-1.

There was concern as the start was delayed due to a missing assistant referee and after a while a replacement was thankfully found. From a Barking perspective Ricky Tarbard was ill in the warm up but recovered sufficiently to appear as a second half sub.

Barking nearly took the lead after three minutes but Dixon blazed his effort over the bar. Junior Dadson hit the post but Barking were rewarded for their pressure after 23 minutes as Max Bradford's through ball found Dixon on the left wing, his low cross found its way to Charlton loanee Eddie Allsopp who slotted the ball home. Staines gained a foothold in the game and were rewarded after 41 minutes as Jack Roult was penalised for a foul in the box - Kladji Cani stepped up to score the resultant penalty. Their joy was short-lived however as Barking drove forward, Seymour blocked an attempted clearance and it fell to Junior Dadson who expertly volleyed the ball home for an immediate restoration of Barking's advantage and his ninth goal of the season.

Into the second half and the lead was doubled as Abs Seymour saw his long shot saved for a corner - Ashman's near post corner was met lowdown by defender Daniel Flemming who's stooping header found the net for the second league game running. 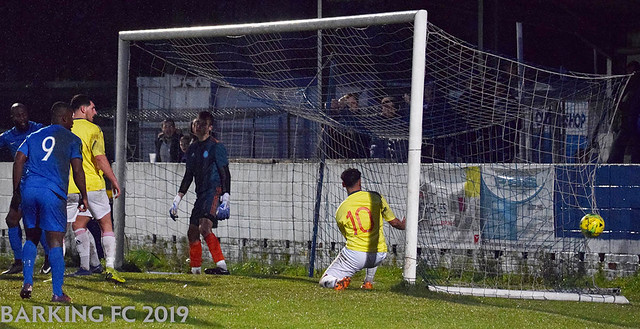 Staines pushed forward and the rainy conditions played a part as both sides failed to find a way through - it was nearly 4-1 with the last kick of the game but Ashman saw his dinked effort well saved by Staines stopper Adams.

There was not much upwards movement in the table but we do have a game in hand over a number of teams below us which is this coming Tuesday when we entertain the FA Vase holders Chertsey Town with a 7:45 kick off.