There are some days when you wonder why you bothered getting up and in footballing terms this match falls into that category:  it started with Jordan Peart pulling a hamstring in the warm up, Jack Hayes dismissed for a professional foul and ended with the home side scoring three clinical finishes late in the game to add to the misery or the gloss depending on your point of view and emphasise why Hanwell are top of the table.

Peart’s pulled hamstring meant a defensive reshuffle and he was replaced by Max Bradford with Abs Seymour moving to left back.

In the first 30 seconds Barking had a good chance to start the scoring when a Eddie Allsopp cross was found Michael Dixon and his looping header was turned over the bar by home keeper Hugo Sobte. The home side opened their account on three minutes when a corner found Gianni Crichlow at the far post and his acrobatic volley hit the net. Barking tried to rally and find an equaliser: on 21 a low cross from Junior Dadson flies across the box just begging for a touch and on the half hour an Allsopp through ball finds Johnny Ashman who in turn finds the net but the offside flag was up early and no goal was the decision. The home side came close on 38 when an attack down the right wing gets into our area and the low shot well saved by Montel Joseph. Two minutes from half time disaster struck for Jack Hayes: following an injury to a Barking player the Referee stopped play and then post treatment dropped the ball at the Barking defender’s feet, he then lost the ball to Hanwell’s Brendan Matthew and as Matthew bore down on goal was hauled to the floor. Hayes was then shown the red card and although any immediate damage was avoided, we went into half time one man and one goal down.

The second half could have started badly but only Montel Joseph stopped us falling further behind when he tipped a long-range effort onto the bar and then following a short corner a hopeful volley was well saved by the back-peddling Barking keeper. There was then a niggly period with a number of fouls leading to the Referee handing out punishment in the form of bookings. On the hour Hanwell had a chance from a far post corner but the headed effort was over the bar and try as they might Barking could not create the golden chance for an equaliser. As the match neared a conclusion the effort of playing nearly half the game with ten men began to take its toll: on 81 the ball was lost in midfield and a cross to the far post was met by Harry Rush who curled the ball home to double Hanwell’s lead and more or less knock the stuffing out of the visitors. Two minutes from the end of normal time a low cross to the far post finds Tayshan Hayden Smith who cuts inside and fires home at the near post. In added time Hanwell improved their goal difference with two further strikes: firstly, a right-wing cross is nodded home from close range by Gareth Chendlik and then Gianni Crichlow who started the scoring completed it by powerfully finishing from a low left-wing cross.

We are back in Velocity Trophy action on Tuesday in the first knockout stage as Premier Division Cheshunt who have Craig Edwards an ex-Barking manager at the helm are the visitors to Mayesbrook Park. 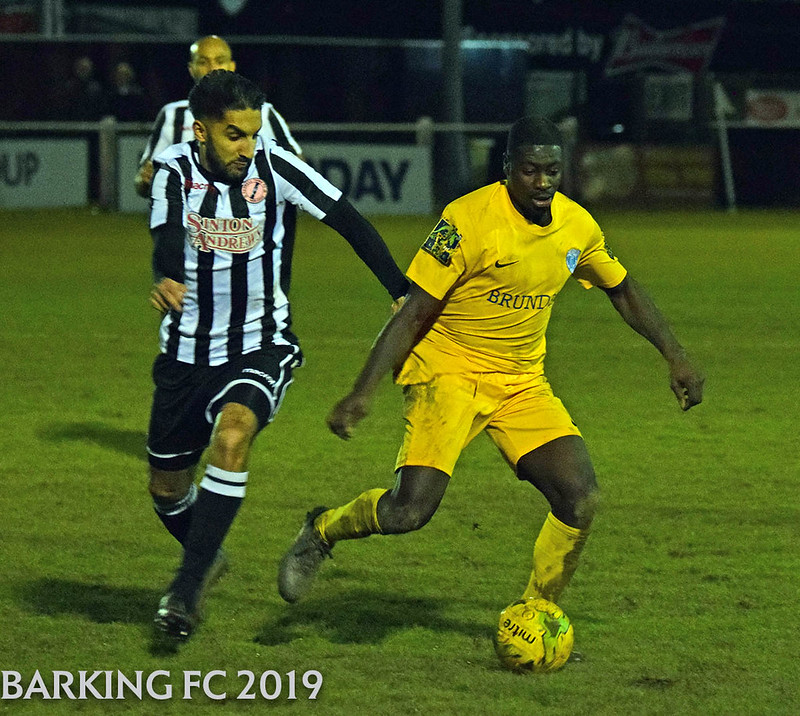