Today was our first ever senior meeting with South Park FC, the only other meeting being a  friendly match last September which we won 6-0 and today from a home perspective was probably only marginally better.

During the week the home side appointed Martin Dynan as their new manager and even before our Tuesday nights superb win over Chertsey Town Justin Gardner speaking to the local press was wary of the effect a new man in charge could have. Thankfully apart from the opening twenty minutes or so Barking nullified the home side and the second Junior Dadson goal just after half time near enough killed off their threat.

Barking were again without Sam Owusu who was serving the last game of a suspension incurred for his sending off against Tooting & Mitcham. However, we named an unchanged starting eleven and only one change on the bench as Steven Sardinha replaced Stuart Collins.

The earliest chance came the way of Barking when from a Johnny Ashman cross a volley from Junior Dadson flashed just wide of the goal. The home side then came into the game more as they tried to get the first game win for their new manager, they had a number of half chances and a penalty appeal turned down: but only a full length save from Montel Joseph stopped the Parks from going in front.  After the half hour mark Barking began to exert more and more influence on the game and came close to scoring when a curling Dadson effort clipped the top of the cross bar and two later minutes a well-placed Abs Seymour on the edge of the box fired in an effort which was just over. The first blow was struck on 38 when the home defence failed to clear a Jordan Peart cross and Junior Dadson rifled the ball home to give Barking the lead. With half time approaching a short corner from the home side was cut back to the penalty spot but the resulting shot was wide.

Barking emerged quickly from the blocks post interval and scored again after only a minute: Michael Dixon started the move by winning the ball, laying it off to Eddie Allsopp and he in turn found Junior Dadson who again slotted home for his twelfth goal of the season and give the home side a major problem. 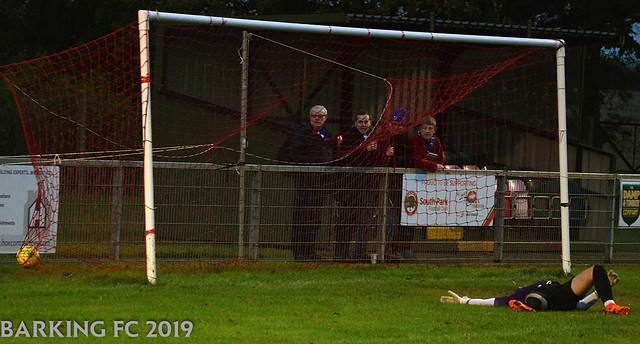 Four minutes later it should have been three when the busy Allsopp found Ashman and his inviting ball across the box was somehow missed by Dadson from two yards. After that, both sides having chances with a Dixon shot which was blocked and Joseph producing a good save again to stop South Park halving the deficit and the bar stopped us again on 54 when Max Bradford’s shot was tipped onto the woodwork by home keeper Sam Freeman.  This was only a temporary let off and with 65 on the clock sub Steven Sardinha played a through ball to set Dadson free and his well delivered chipped cross found Eddie Allsopp the smallest Barking player who rose excellently to head home and make it 3-0.  Five minutes later the game was up for South Park when Dadson was set free again, this time by Allsopp and leaving a defender in his wake passed the ball to Michael Dixon who could not miss and score his third goal in two games and Barking’s fourth on the day.  South Park continued to work away but even a 77th minute free kick opportunity which cleared the bar could not provide any consolation. Six minutes from the end Allsopp set Junior Dadson in on goal and for a scant second it seemed that the Barking front man would get his hat trick but the offside flag denied him. As with the last two matches the final word went to Johnny Ashman and it was third time lucky as the ball broke kindly to him in the penalty area, he steadied himself sold Freeman a dummy and completed not only the scoring but a pleasant day out for the Barking contingent in Surrey.

It’s back to Velocity Trophy action on Monday as we make the short trip to Parkside to take on Aveley in our penultimate group match. 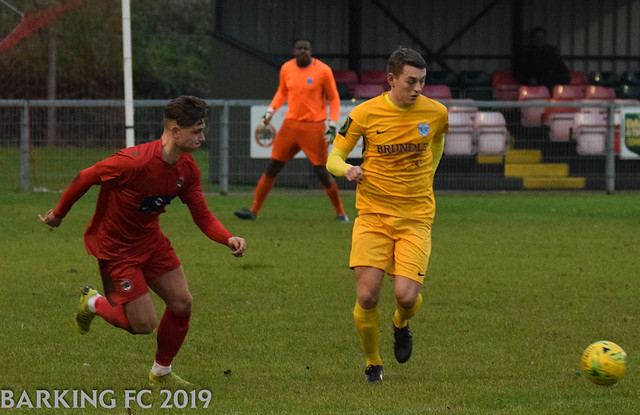