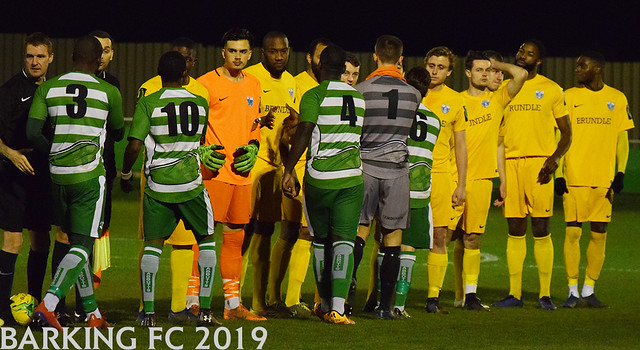 BARKING CALL THE SHOTS AT CAPERSHOTTS

Barking put the disappointment of Saturday’s home defeat to FC Romania behind them with a hard-fought win over Waltham Abbey at Capershotts. It could've been a slightly less stressful last fifteen minutes as Joe Bruce had his penalty saved but the visitors held strong until the final whistle.

The yellow shirted Blues started off on the front and in the opening period had a number of attacks and half chances along with two penalty shouts for fouls on Jack Hayes and Dee Dumaka - but both were waved away by the referee. With fifteen minutes gone Ricky Tarbard forces a corner which is taken by Abs Seymour is too long and it is retrieved by Sherri Artmeladze whose ball into the box is met by Dumebi GB-Dumaka and his bullet shot finds the net giving home custodian Charlie Crowley no chance. Ten minutes later and it is nearly two when another corner is cleared and this time Max Bradford does the retrieving and finds Johnny Ashman who cleverly turns and shoots, but a home defender stationed near the line clears the danger. Two minutes the home side produce their best chance when a dangerous ball into the box finds an Abbey forward and his on target shot is saved by the feet of Joshua Roach as the pressure is ratcheted up a notch, Roach is in action again on 36 making a low save to palm away a goal bound shot. A minute later it is the visitors who go close as another well worked corner finds Artmeladze but his shot flies just wider of the goal. On the verge of half time Jordan Peart’s header forward lands in the box and the incoming Ashman lobs the ball over Crowley and unfortunately over the bar. 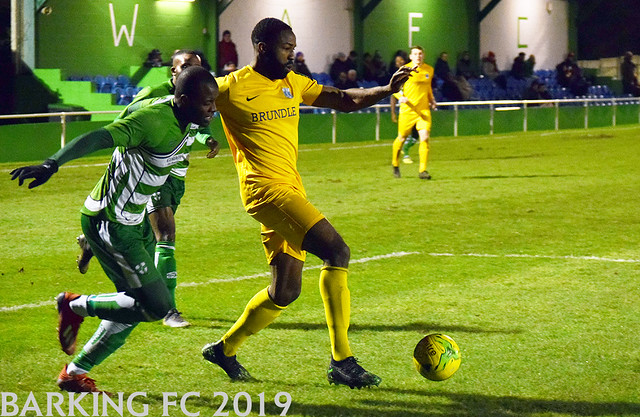 After the interval Barking again started well and Ashman’s cross is played back to Abs Seymour and his well hit on target shot is dragged away from goal by Crowley. On 53 Abbey’s equaliser arrives when Daniel Flemming chases down the persistently dangerous Aron Gordon and robs him at the expense of a corner and the flag kick is powerfully delivered and powerfully finished by Billy Holland. Barking come again and on 61 a good run down the line by Peart and his low cross lands at the feet of GB-Dumaka who elects to shoot and his effort goes close but not close enough. The goal that transpired to be the match winner was scored on 66 minutes when a excellent ball from Joe Bruce puts Johnny Ashman away and clear, with Crowley advancing from his goal the Barking winger lobs the ball over him and into the net for his seventh of the season. Waltham Abbey respond but a well-placed attacker heads over and we continue to lead. On 76 a golden chance to score a third goal arrives when Artmeladze is bundled over in the area and our third penalty appeal is upheld - however, Joe Bruce’s penalty is hit too close to Crowley who saves well and there is no chance of a follow up. The remainder of the match is typified by some firm defensive play by Barking limiting Waltham Abbey to not very much in the way of clear cut chances and the substitutes: Michael Dixon, Giovanni Palmer and Steven Sardinha alongside the eight starters working hard to ensure our victory as Abbey exerted pressure through a series of corners and attacks. Finally, after seven minutes of added time the referee's whistle signalled our sixth away win of the season.

We are still in ninth place but only three points separates us and Uxbridge in the last play-off spot and there is another tough game this Saturday at Mayesbrook Park when second placed Hanwell Town are the visitors having beaten us 5-0 back in early December.