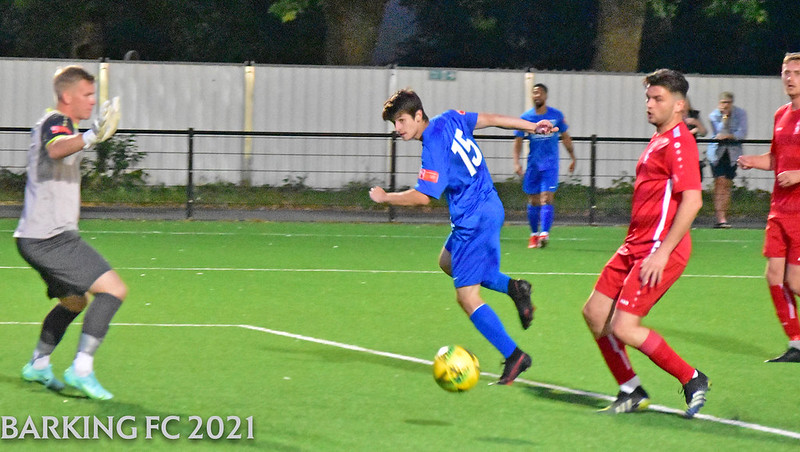 ALL SQUARE AGAINST AVELEY

There were changes to the starting eleven: Jay Leader is injured, so Jacob Adeyemi made his first start of season, Louis Dillon replaced Peter Ojemen and after his match winning goal on Saturday Kieran Jones replaced Charlie MacDonald.

It is the visitors who start on the front foot and only a timely interception by Jacob Adeyemi stops a dangerous run into the Barking box. The Blues reply with a dangerous cross by James Folkes which eludes Kieran Jones, we are then given advantage for a foul on Jones and George Purcell tries one of his audacious chips which is wide. Aveley have a golden chance when an unmarked George Allen heads over. At this point Aveley are showing the stronger but Barking can’t seem to get their passing game going nor effectively retaining the ball. On 20 minutes George Sykes works his way into a good position but James Shaw is equal to the effort and turns it away for a corner and five minutes later Purcell has the ball in the net from a Jones pass but he is adjudged to be offside. 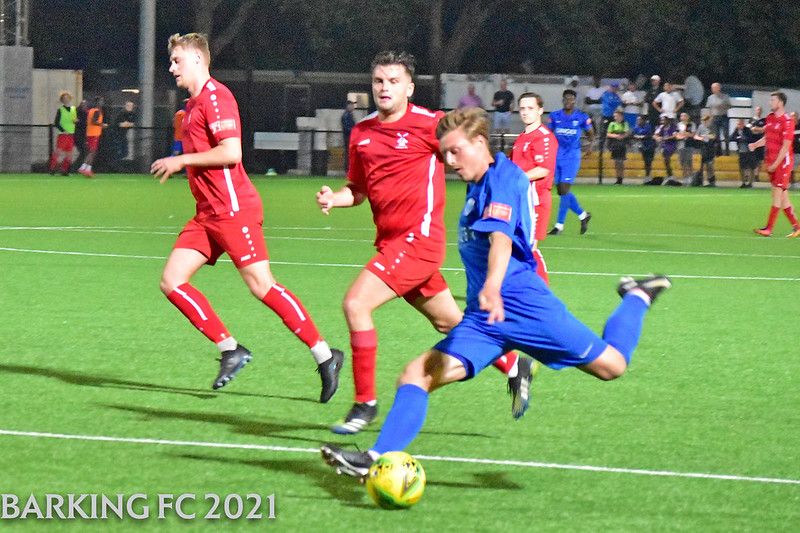 Just after the half hour Aveley shout strongly for a penalty when Shaw comes out to meet Freddie Card and the players come together, but the referee deems it is no more than that. The last chances of note in the first period are Barking’s: Jess Norey plays in Osa Otete who has a clear sight of goal but blasts over the bar, then Purcell produces another cross which unfortunately Jones is again the wrong side to take advantage.

The opening exchanges of the second half replicate the first as it is Aveley who start the better. On 51 Alex Akrofi curls a free kick over Shaw and also just over the bar. Three minutes Shaw and Sykes face off again and it is the Barking keeper who comes out on top, although better contact from the Aveley striker would have put his side ahead. On the hour the game was illuminated by a rocket from Barney Williams who after the ball being played around is found by Norey and he is afforded the time and space to shoot from 25 yards and gives Aveley keeper David Hughes absolutely no chance.

However, the lead only lasts seven minutes as a dangerous ball across the home area is not dealt with and Jon Nzengo fires the equaliser past Shaw and into the net. Barking fight back and the tireless Purcell who all night worked so hard to provide opportunities for others produces yet another cross which was just too good for anyone. A quickly taken Aveley free kick nearly catches the Blues out but thankfully it only finds the side netting, the home sides last chance comes nine minutes from time when a Otete cross is touched away by the fingertips of Hughes. From thereon tiring limbs and resolute defending from both sides means that we have a replay next Monday at Parkside.