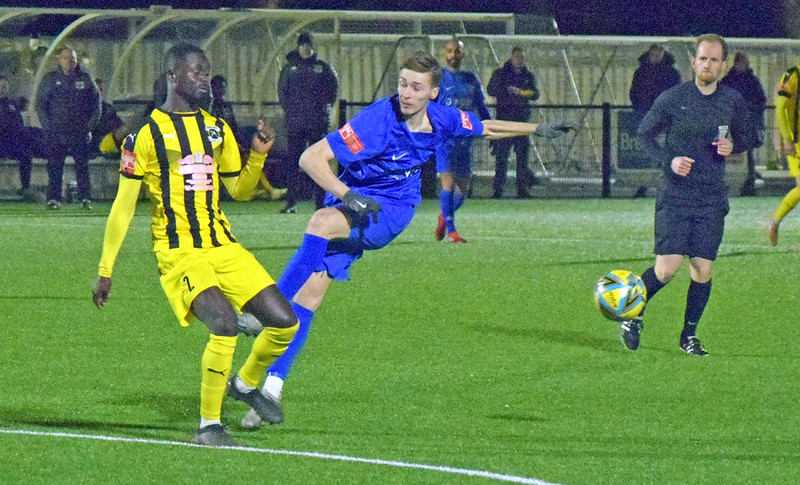 BLUES HEAVILY STUNG BY THE BEES

Barking failed to get the Friday feeling as after the interval some really poor defending coupled with the inability to break down a solid Basildon defence meant another home defeat and we will be now be looking nervously at tomorrow’s scores, if Hullbridge Sports manage to beat Great Wakering Rovers we will be in the second relegation spot.

Basildon included five former Blues and two of them were responsible for all three goals.

Early on there was no indication of what was to come as the home side looked the more likely to make the breakthrough. A Barney Williams free kick is met by the head of Kieran Jones but it turned out to be a comfortable catch for Emmanuel Olajide, thereafter the game turned scrappy for a while but on 15 a cross by Harvey Browne finds George Purcell who swivels and shoots: only for the ball to smack the post with Olajide grasping at air. On the half hour mark Basildon have their first telling opportunity Nathan Fuma’s low cross is turned goal ward by Declan Nche but his own player Steven Sardinha blocks the shot. This chance apart the visitors are not getting a real look at the Barking goal. Seven minutes from half time Harvey Browne plays Charlie Heatley in on goal but Olajide turns his stinging shot behind for a corner. With the half nearly over Basildon move in front when Daniel McCullock’s cross is powerfully headed in by Fahad Nynja.

As to be expected Barking come out to try and rectify matters and although there is a lot of effort there is not much end product and James Shaw needs to be on his toes to prevent a second. Then we have three minutes in which Basildon move the game away from the Blues: on 54 Olajide launches a long kick forward and Nynja takes advantage of the hesitation in the Barking defence and volleys home his and Basildon’s second. Just three minutes later Olajide repeats the trick and this time Nynja flicks the ball on to McCullock who puts his side three up. Barking don’t give up but shots from Heatley and Purcell all fail to produce anything and finally ten minutes from time sub Osa Otote finds Heatley who in turn finds another sub Tom Salter who gratefully accepts the chance to fire home his second goal of the season. There are further attempts from Kenidi Dariri and Jones but in the end Barking slip to their thirteenth league defeat of the season.

We are at home again on Tuesday evening in another league encounter as we entertain Grays Athletic.