NO FAULTY COGS IN OUR MACHINE

Following on from Saturday’s stalemate we were looking for both an improved performance and a win to take us into the next round. Although it turned to be a nervy finish to the game Barking thoroughly deserved their victory and in doing so we inflicted our first defeat on Coggeshall Town after five defeats and Saturday’s draw in six previous matches.

There were two changes to the starting line up: after picking up a head injury on Saturday Kenedi Dariri was replaced by Eljay Worrell. Louis Dillon made his first start of the season coming in at left back as Sa-Sean Lutumba moved to right back replacing the unavailable Harry Baker.

After an even start in which both sides tried to impose themselves on the game it is the home side who go close first after seven minutes. An Eljay Worrell free kick finds Charlie Cole whose header is saved by Town keeper Akan George and Alfie Leach is unable to get to the rebound. Neither side threaten a goal until 21 minutes when a Worrell free kick is cleared but Alessandro Wisdom does well to return the ball so Worrell can cross again and this time it is met by the head of Charlie Cole who finds the net and the Blues are a goal up. 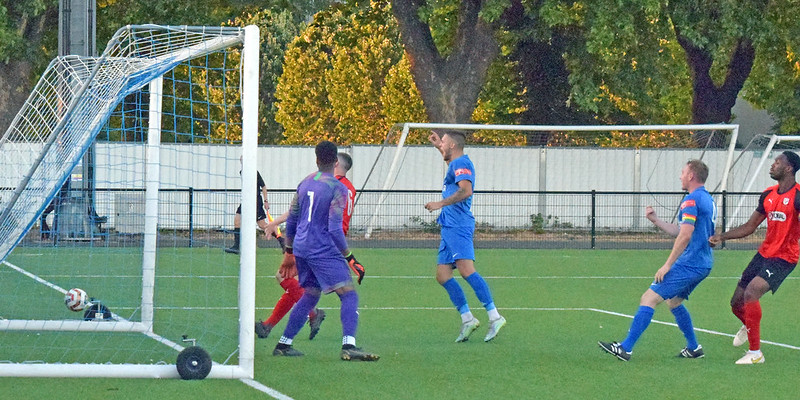 On the half hour Barking double their lead: from a Coggeshall throw the ball eventually breaks to Leach who launches a pass forward, which Cole battles for and is then able to free Wisdom who delivers a superb cross to George Okoye who has wandered into space and his header matches the cross to bury the ball for 2-0. 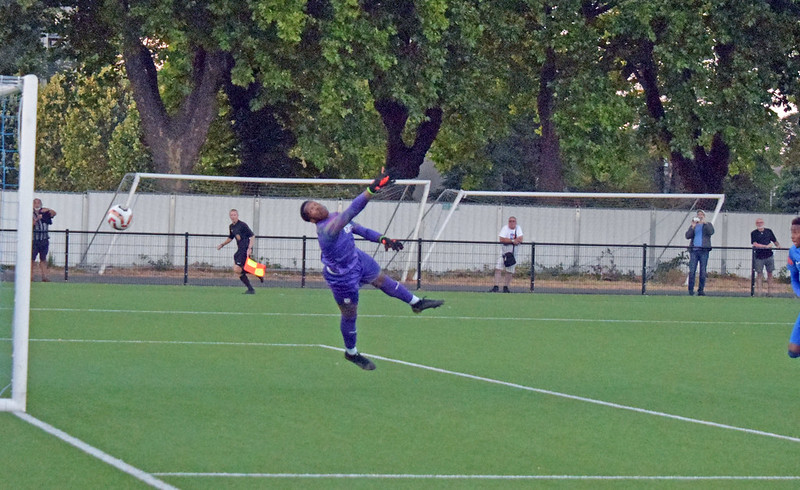 Seven minutes later the home side nearly have a third as a Worrell corner is met by Ben O’Brien but he can’t keeper his header down. Right on half time there is a skirmish on the edge of the Coggeshall box from which Barking are awarded a free kick – as on Saturday tempers were always close to boiling point and as a result Josh Hughes of Coggeshall is shown a red card for his part in what occurred and for the second game running the Seed Growers finish the game with ten men. The resulting free kick unfortunately comes to nothing.

At the start of the second half it is clear that Barking need to replicate what they were doing in the first half and most importantly keep a clean sheet. After just three minutes this goes out of the window as following a spell of pressure the ball is crossed into the box by Daniel Ogunleye and it beats the outstretched hand of Laurence Whymark and finds the top corner of the net. Two minutes later yet another dangerous delivery from a free kick by Worrell leads to a shot by Leach but his effort is blocked. On the hour it is yet another Worrell dead ball delivery that is cleared but Jack Folan latches on to the clearance and his shot is only just wide of the goal. In between these efforts Coggeshall are still in the game but any threat is dealt with the home defence. With fourteen minutes left Wisdom finds Worrell in the box and with some good foot work he provides a calm pass to sub Jamie Age: but Akan George in the Coggeshall goal denies him. Two minutes later Remi Nelson replaces George Okoye as Barking try shore up at the back. Although mostly successful in their defensive efforts in the third minute of added time Whymark goes full length to turn away a shot which came through a crowd of players.

The relief at the final whistle was palpable and we now go on to face Leighton Town in the preliminary round, but first we have two league games starting on Saturday with a trip to Little Oakley who we will be meeting for the first time.

Report source: Terry Gilbert/Barking FC
Please note that the opinions expressed in this report are those of the author and do not necessarily represent the views of, nor should be attributed to Barking Football Club. 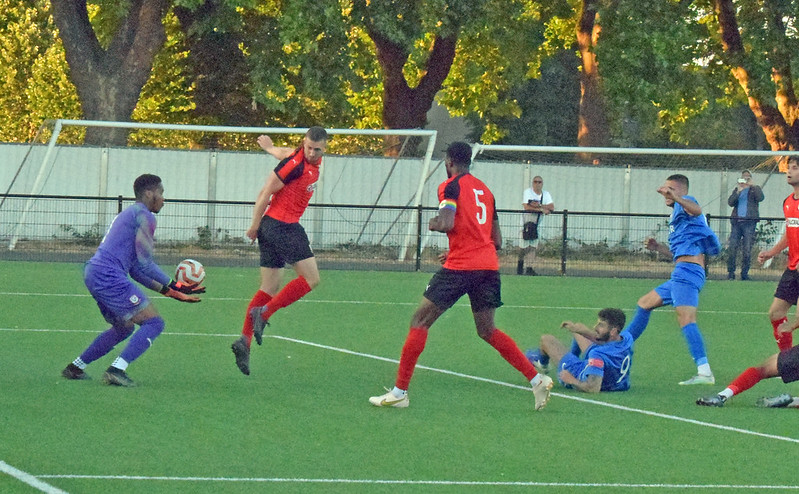