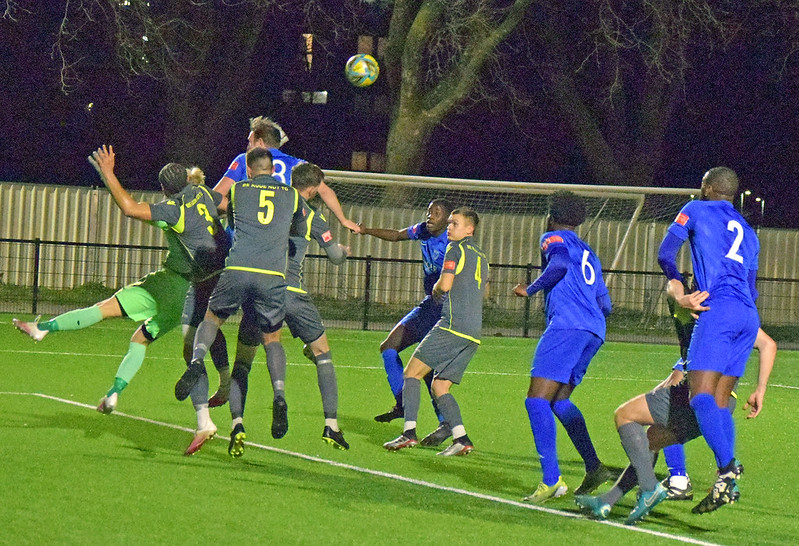 LUCKY SEVEN FROM THE SPOT FOR BARKING

Barking moved into the quarter finals of the Velocity Trophy with another penalty shoot out win this time over East Thurrock United, this was our seventh successive penalty shoot out win and the fourth this season. The Blues led for nearly the whole of the second half until James Folkes unfortunate own goal on 85 minutes levelled the scores. This was our seventh consecutive shoot out success and each of our three Velocity ties have been settled in this manner.

This is the first time we have reached this stage since 1987/88 losing 3-0 to Hayes at Mayesbrook Park.

Our new striker Manu Oke-William marked his debut with a penalty to put us in front and Ben O’Brien made his 399th league and cup appearance.

It was East Thurrock who made the early running and made a couple of early chances but they did not threaten Tom Crump making his second appearance of the season. Barking did enjoy lots of possession early but did not have much of a cutting edge, but at the quarter hour mark a corner is recycled to Barney Williams who shoots but The Rocks keeper Arthur Janata is equal to the effort. This sparks the visitors into life and they power towards our goal and the final pass of the move is met by former Blue Johnny Ashman who beats Crump but Elliot Omozusi is in the right place at the right time to clear the ball. After that the game falls into a flat period with neither side really able to carry much of a threat. However, a minute before the interval Barking are in front: James Folkes runs into the East Thurrock area and appears to be fouled outside the box, carries on and is fouled again, although he goes on to deliver the ball to Oke-William who fires home, the referee has already blown for a penalty. After a slight delay caused by the referee confirming the decision with his assistant Manu Oke-William takes responsibility and blasts the ball past Janata to score his first goal for the Blues. 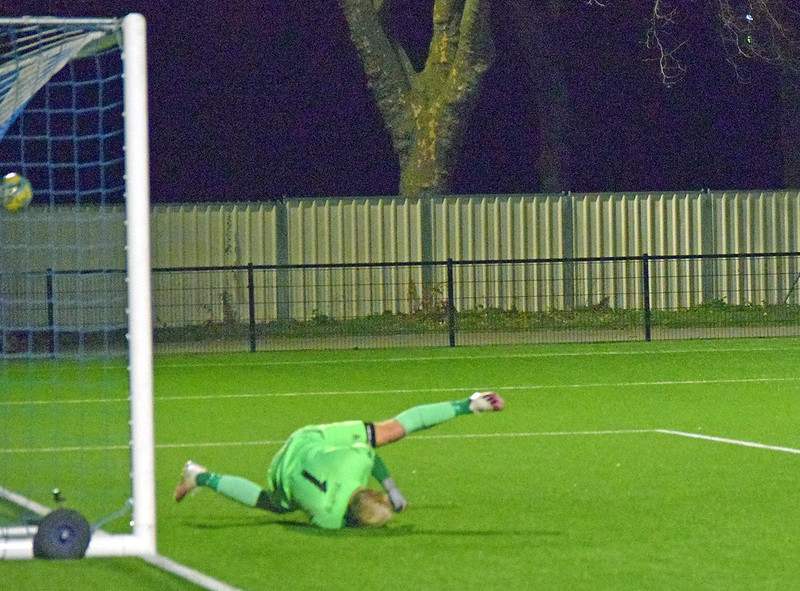 Four minutes after the restart and a good turn and pass by Oke-William sets up Osa Otote but his effort is wide. After 54 East Thurrock have their best chance of the half as Kyle Eam’s tackle breaks to a visiting forward who forces Crump into a good save, there is also a double whammy for Eam as he has to leave the field and is replaced by George Okoye. Although Barking are making a number of half chances the final ball is not good enough, another corner on 66 minutes comes out to Williams and he again fires in a shot from distance that is just wide. East Thurrock have a chance of their own but Ashman fires over as the Barking defence seems to be dealing with anything that is thrown at them. However, five minutes from the end East Thurrock flash a dangerous ball across the box which is deflected behind for a corner, the resulting flag kick causes problems and when it is returned Crump is out of position and James Folkes inadvertently turns the ball into his own net. Despite this setback in added time the Blues come closest to scoring; in the second minute Kieran Jones brings the ball forward and sets up sub Ronaldo Dariri whose shot hits the body of Janata who had stood tall to stop him, two minutes and Jones again is the provider as he sets up Otote but Janata saves his shot and the resulting corner is contested by a mass of bodies until finally Kenidi Dariri is able to divert the ball towards goal but it is cleared off the line. 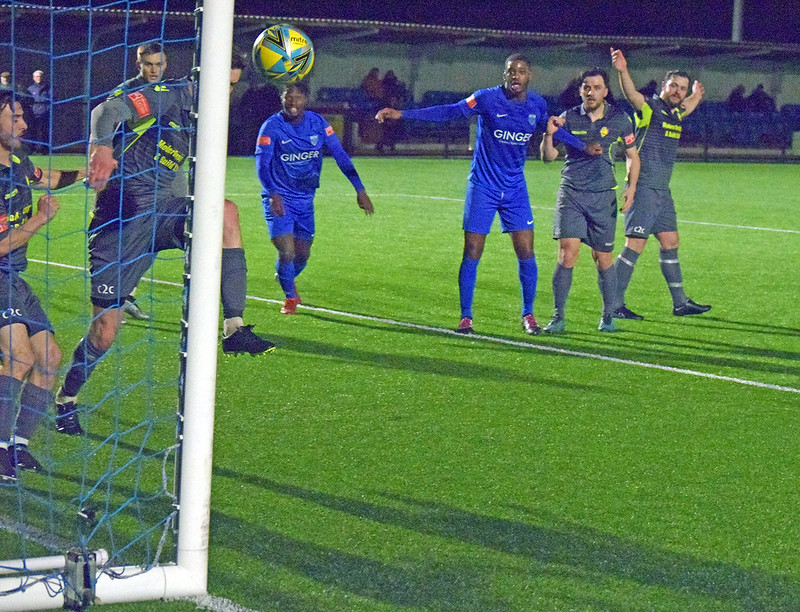 So, with no further score we go on to penalties.

Barking went first: Barney Williams and Sunny Dutton are successful, as is Kenidi Dariri. However, East Thurrock’s Jack Morrell fires wide and James Folkes with his usual long run up makes it 3-1 but Alex Hernandez successfully reduces the deficit only for George Okoye to make it 4-2. Hope Harry makes it 4-3 but Kieran Jones settles the issue by making the score 5-3 and denying East Thurrock another penalty. 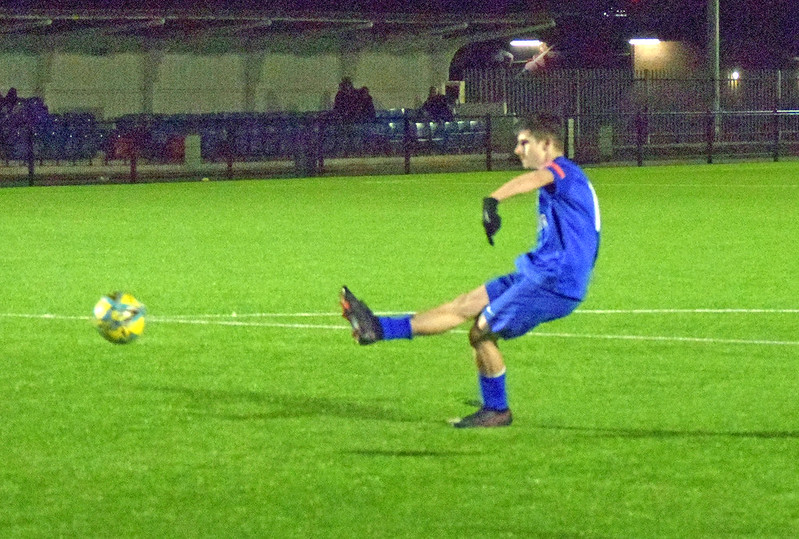 We are back to the league on Saturday as Coggeshall Town come to Mayesbrook Park as we look to beat them for the first time and win a much needed three points. 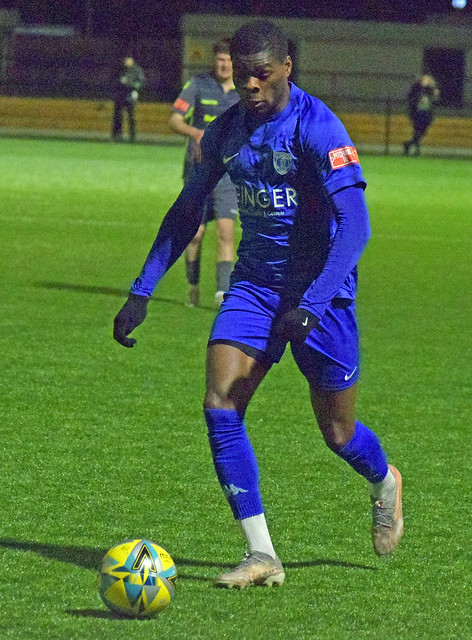