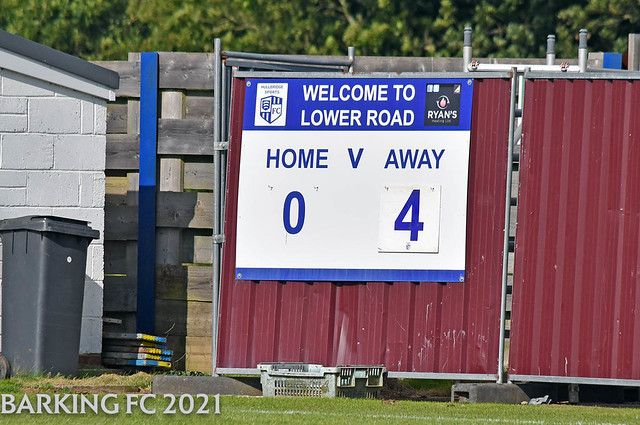 NO HORRORS AT HULLBRIDGE

Today’s game was of many firsts including our first visit to Hullbridge since February 2017 in our Essex Senior League championship season and first game back in the North division of the Isthmian League since losing 7-1 at Maldon & Tiptree in April 2019.

This was also our first opening day success in the Isthmian League since we beat Molesey also away 2-1 on August 19th 2000.

There were several firsts on the playing side with no less than 12 players making their senior debut. Turning out for Hullbridge were former Blues in Lewis Greene, Michael Mignot and Callum Thompson who was an unused sub.

It took until the latter stages of the first half by striking twice for Barking to get a grip on the game and another goal after the interval made for easier second half.

As to be expected after weeks of preparation and friendly matches both teams were quick off the mark and looked to make an early impression.

The first chance of note fell to George Purcell after five minutes but his effort is saved by Lewis Greene, the home side’s first opportunity arrived a few minutes later but it goes wide. Kieran Jones nearly plays in Purcell but Greene is quickly from his line to gather the ball. On the quarter hour Mignot breaks through for the Sports but Allan makes a vital save and the follow up from Lewis Watson is blocked by a defender. Charlie MacDonald works some space but his shot is blocked and then James Folkes shows some nifty footwork but his effort is wide.

The home side then suffered a blow as debutant Joao Carlos was replaced by Anthony Martin after lengthy treatment and although this maybe co-incidental as Hullbridge after looking dangerous for the first half hour the game swung then towards the visitors.

From the 34 minute mark onwards Barking began to exert pressure and create chances – firstly, from a corner the centrally placed George Purcell scuffs his shot then shortly after is he left time and space to shoot but he can only sting the hands of Greene with his shot. The Barking striker then turns provider on 38 to find Osa Otote but although it is a hard shot it ends up wide of the goal.

Four minutes before the interval the first goal arrives: James Folkes is given the ball by Otote and jinks he way inside and his cross turns into a shot which beats the flailing hand of Greene strikes the bar, comes down onto the post and enough of the ball has crossed the line for the Assistant Referee to signal a goal. 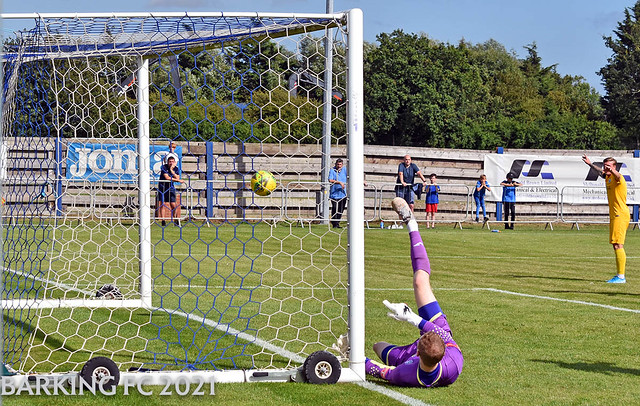 Two minutes into added time and the ball is deflected into the path of Charlie MacDonald who beats Greene to the ball and slots it home to double Barking’s lead.

Barking are sent out early for the second period and are probably eager for more of the same.

With only two minutes of the second half gone MacDonald is through on goal and although he rounds Greene he can only square the ball but there is no Barking player on hand to take advantage. Two minutes later that is forgotten as a cross into the box is expertly headed down by Kieran Jones to the waiting Charlie MacDonald who slips the ball past Greene for a three goal lead. A minute later and MacDonald has the ball in the net again but this time it is disallowed for a foul on Greene. 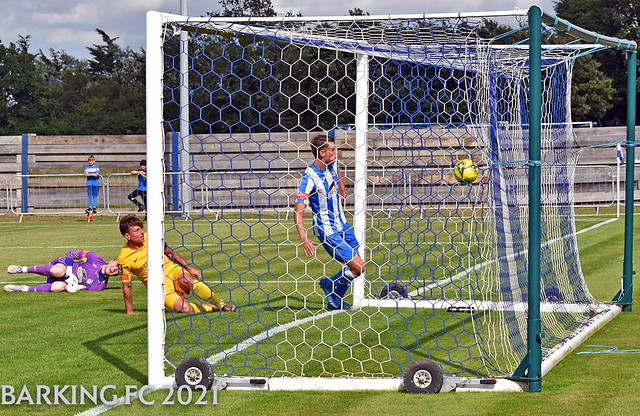 Hullbridge try to rally and on 54 Allan denies Charlie Cole but he is deemed to be offside. Barking have the next best chance on 66 when Folkes escapes down the line and crosses to Osa Otote who spurns a golden chance by firing wide.

By this period of the game Hullbridge had made all of their substitutions and were trying to get some attacking impetus but they could not make much impression against Leader, Omozusi, Williams and Folkes who remained unmoved in the Barking defence.

As the game moved into the final stages Barking look more likely to score again: a Purcell cross finds sub Charlie Heatley but he cannot get the required contact and Greene scoops up the ball. The game is wrapped up on 83 minutes when another sub Daniel McCullock is found out wide and his inviting cross is met by George Purcell who taps home for 4-0.

Hullbridge try to get a consolation goal but unfortunately from their perspective they can only find the top of the net not the back. There is one last chance as McCullock finds himself in acres of room to run into and he crosses for Purcell who heads wide.

A satisfying opening day for the Barking contingent at Lower Road with many positives and more importantly three points and a zero in the goals conceded column. 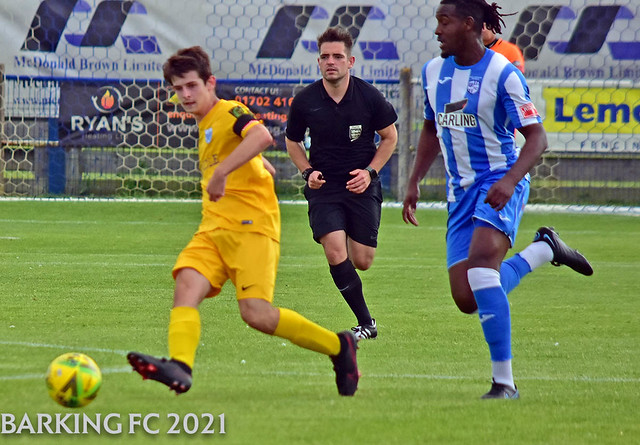